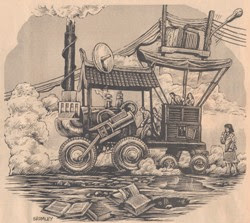 Controversial politics and the precipitated caution displayed by prospective businesses have threatened the country’s position in Asian markets.

Thailand is enduring what more optimistic Thais describe as a flat year. The country’s image as a place with an exciting business “story” to tell has been tarnished by a political crisis that will leave it with a caretaker government for most of this year.

Prime Minister Thaksin Shinawatra has continued to promise fantastic economic performance and revitalised entrepreneurship since the former tycoon was elected by bedazzled voters in early 2001.

But much of the froth was blown off his promises when his family’s business empire was sold to Singapore ’s state investment arm earlier this year for a huge profit -throwing fuel on already bubbling dissatisfaction with self-serving rule.

The Thaksin government has in recent years pumped money into “deserving” parts of the economy but, without more fundamental changes, the positive effects have been short-lived.

“Thailand always looks good when you place it against the likes of Indonesia, Cambodia, Burma and the Philippines . It has lapped these countries many times. But is it catching Singapore, China or even keeping up with Vietnam ? That is a different story,” says Anthony Ainsworth of Richard Glynn.

A generation ago Thailand was often put in the same box as the Philippines . Both countries were said to be bursting with a potential that would be released if only dubious governments, rampant corruption and infrastructure problems did not suppress native entrepreneurial instincts.

Whereas in the last two decades Thailand – to most disinterested observers – has moved onwards and upwards, the Philippines has mostly stagnated. Per capita GDP in the Philippines is now half that of Thailand .

Bangkok rarely figures near the top of indices of likeable or quality of life cities but it has acquired a worldly, sophisticated patina that Manila can only envy.

“I feel comfortable and content in Thailand because the country is confident in itself. There is the vibrancy here of a country that seems to be going places, even if no one seems to be exactly sure where,” says the managing director of a foreign manufacturing joint venture.

When a country acquires a certain level of international business and a number of foreign executives they in turn attract other expatriates, as well as returning locals who had moved overseas.

Venture capitalists looking for early gains might be disappointed, but the foreign CEO’s spouse feels happy – there are the makings of a proper secondary market in residential property and the arts scene flourishes. A friendly, fecund environment attracts ambitious foreigners and makes business sense.

Tolstoy claimed that “all happy families are alike, but each unhappy family is unhappy in its own way”. Similarly, “happy” countries keep the entrepreneurial playing field level enough to give everyone a decent chance, make the penalties for failure less than terminal and keep the business environment fluid to generate opportunities.

An “unhappy” country can fail to invest in education, allow its leaders to favor their friends or neglect essential infrastructure. All these negative qualities are pulling Thailand backwards, if Thai critics of the government are correct.

It may be true – as worldly observers like to claim – that the Thai economy is capable of driving forward almost in spite of its government. But nothing is written in stone: fumbling administration, a loss of confidence, a failure to address basic education problems can all erode a nation’s narrative.

Warning signals may be flashing. Seagate, the world’s largest maker of hard-disk drives, recently chose Malaysia over Thailand for a $1.1bn expansion.

Earlier, Intel Corp said it would invest up to $605m in a semiconductor plant in Vietnam . “The reasons to invest in Vietnam are evident to all of those who look around – a very vibrant population, a young population, an increasingly strengthened education system,” says Craig Barrett, Intel chairman.

Foreign chambers of commerce in Thailand warned in July that a failure to solve the political vacuum by the middle of next year could cause a sharp decline in investor interest. Important decisions of free trade agreements and mega-projects need to be urgently addressed, they pointed out.

Tetsuji Banno, president of the Japanese Chamber of Commerce, says that if the political problems were not sorted out Thailand could lose its prime position as a priority investment target.

“Most people have written off this year. I wouldn’t say people are moving away, but no one wants to stick his or her head out with all these uncertainties,” says Edwin Sim, CEO of Human Capital Alliance, an executive search firm.

One European merchant banker argues that “countries can and do go out of fashion. I don’t necessarily think this will happen with Thailand but for how long will it remain a place where someone says ’Oh great!’ when they get posted there?

“It can be difficult to pin down exactly why but a place just seems to lose steam. I wouldn’t describe it yet as a warning signal but I sense that people are becoming more cautious about working in Thailand .”