The Nation: Man with a Grand Plan 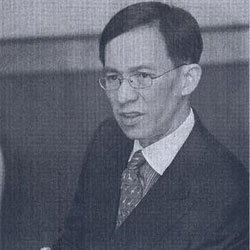 K I Woo and Korn/Ferry International’s managing director discuss some issues over lunch.

Our lunch at the Dusit Thani Hotel’s Hamilton Steak House started with whiskies and sodas, so it wasn’t long before Edwin Sim, the managing director and country head of Korn/Ferry International and I began discussing key business issues in our region today, particularly those affecting his head-hunting business.

Sim, a Chinese-Canadian, with a finance background has spent most of his professional life overseas. Previous to his recruitment as Korn Ferry Thailand ’s managing director, he was a senior executive with publicly listed Unithai Shipping Plc.

After assuming Korn Ferry’s helm two years ago, Sim has implemented a plan he hopes will differentiate his company from his many competitors. To accomplish this goal, he has decided to utilize the unique skills of Thai executives he’s encountered during his many years inThailand . “I realized early on how important relationships are in Thai society,” he said.

To successfully recruit executives for multinationals in Thailand , Sim said a headhunter must have knowledgeable personnel who are plugged-in not only to the community but also to specific industry groups. “Most of our mandates are from multinational or large Thai corporations,” he said.

Although Thailand is a relatively huge country with more than 60 million inhabitants, Sim said that its pool of qualified multinational executives is relatively small.

To ensure that Korn Ferry is capable of providing the best possible service for its many multinational clients, Sim has painstakingly built up the company’s personnel with professionals from various industry groups.

His key recruits include a former medical doctor, who is responsible for pharmaceutical searches and a former leading telecom executive to head IT searches. “I knew we needed good people especially in a bad economy if we wanted to grow at a solid and steady pace,” he said.

With his many years dealing in the Thai financial sector and particularly with Stock Exchange of Thailand and Securities and Exchange Commission officials, Sim personally also fits into this “specialist” category.

In the executive search business, Sim said companies really don’t have any leeway to botch an assignment. “This is a service business which depends a lot on personal recommendations and repeat business,” he said.

Even in a flagging economy, Sim’s plan is apparently working. Since taking over Korn Ferry, he has tripled personnel from three to nine professionals. At the same time, revenues are being generated at standard industry levels. “Our goal is to generate revenues of about three to five times each employee’s cost,” he said.

As a branch of the largest world-wide executive search company, Sim said Korn Ferry inThailand generates about 50 per cent of its business from overseas office referrals. Most of the company’s business is with multi-national companies looking to fill senior executive management positions. Sim said most senior executive positions are filled by executives currently working for major companies in Thailand . “In today’s market, companies are reluctant to bring in people from overseas unless its absolutely necessary,” he said.

Even though his company is growing in Thailand , Sim is however somewhat troubled by the negative feedback he often receives from overseas executives. He said many foreign executives invariably formed very negative views of Thailand because of overly pessimistic news reports. The one bright ray-of-hope is that other foreign multinational executives are using the current economic downturn as a platform to expand their businesses and build for the future. “These people tell me that they still believe that Asia with be the world’s 21st century’s engine of growth,” he said.

As we completed our desserts and after lunch cocktails, I asked Sim to reminisce on the difference between running his own operation to his previous position as a senior executive in the family-controlled public company run by shipping magnate Chavalit Tsao and his family. Sipping his cocktail before answering Sim said, “I’m still great friends with Fred (Chavalit) but at Korn Ferry I get the satisfaction of building something on my own,” he said.

On my drive home, I couldn’t help thinking that Sim was a man who was comfortable that he would achieve his current mission.

The Nation: China telecom companies look to region for expansion