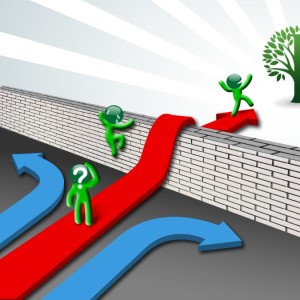 In today’s disruptive internet-driven environment, all companies are forced to re-position their core businesses while actively investing in future new growth areas.

A recent Harvard Business Review article “What the best transformation leaders do” indicates that many companies that try to transform have failed.

“A common reason why is that leaders approach the change as one monolithic process, during which the old company becomes a new one.”

Monolithic processes have not worked for many reasons.

For instance, an organization that grew up producing newspapers, not only lacks key skills to build a digital content company but also might actively resist embracing the new in order to protect the business it knows and loves.

“Dual transformation” models have proven to be more successful.

Apple is a classic model of how a “dual transformation” strategy may work, the authors’ said.

“With the iMac and iBook, Steve Jobs reinvigorated the core Macintosh franchise by injecting a new sense of design and rethinking what computers would be used for in the age of the internet.”

Separately, Jobs launched a device and content ecosystem, starting with iPod and iTunes, that would become the company’s new growth engine.

At the same time, while expanding its core retailing platform into new categories such as food and streaming content in parallel, Amazon developed into the world’s largest cloud computing company.

Established as a separate division in 2006, Amazon Web Services (AWS) ultimately addressed a long-standing analyst complaint about Amazon — that its core was only barely profitable.

Today AWS accounts for just 10% of Amazon’s $150 billion in revenue, but generates close to $1 billion in quarterly operating profit.

It decided to focus on higher-margin custom manufacturing, and opened 3D printing centers to fashion components such as parts for wind turbines.

The new growth areas now make up 47% of sales and have turned the company into an industrial solutions and digital services company that creates internet-connected elevator systems.

Prior to Nadella’s reign, large teams would take months or years enhancing legacy franchise programs such as Windows and Word. The culture became highly risk averse.

In the new environment the market demanded weekly or monthly changes that could only occur in a less risk averse culture.

It required a new culture of risk taking and exploration.

Nadella successfully transformed Microsoft’s culture because unlike his predecessors, he was a hands-on engineer, known for listening, learning, and analyzing.

He empowered employees to work on projects they were passionate about and most importantly recognized that failures should be viewed as learning experiences rather than career-ending moments.

Visionary founders with no prior experiences in their industries such as Amazon’s Jeff Bezos came from finance and Netflix’s Reed Hastings was in software are leading successful transformation leaders.

Not saddled with predetermined ways of doing things, they innovatively reinvented retailing and television.

They also successfully retained their outsiders’ perspectives even through waves of growth.

The study also said an interesting pattern has developed across professionally managed companies.

These board-hired CEOs were usually “insider outsiders” that had an average tenure of 14 years on the job before becoming CEO.

Many of these CEOs had ‘outsider’ roles working on emerging growth businesses or exploring external opportunities, giving them critical distance from the core.

“After becoming CEO, that insider-outsider perspective helped them explore new paths to growth without being constrained by yesterday’s success formula.”