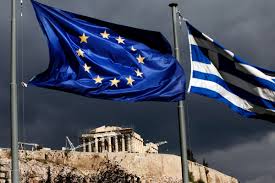 Oxford associate professor Pavlos Eleftheriodis said in “Misrule of the few – how oligarchs ruined Greece” that since the early 1990’s, a handful of wealthy families have dominated Greek politics.

These elites including professionals and public sector heads, he said preserved their positions through media control and old-fashioned favoritism and sharing the spoils of power with the country’s politicians.

“Greek legislators held on to power by rewarding small number of professional associations and public sector unions that support the status quo.”

Twenty per cent of Greek children live in extreme poverty while 90 per cent of the unemployed receive no government assistance and millions lack health insurance.

The Karamanlis government was narrowly elected in 2004 after a short economic boom from the Athens Olympics.

During the Karamanlis government, Greece’s debt to equity GDP ratio jumped from 97 per cent and jumped to 130 per cent in 2009.

“Karamanlis campaigned as a reformer, promising to shrink the civil service, open up economy and clean up politics.”

In office, however, Karamanlis bowed to special interests that wished to maintain the status quo.

During his five years in power, Karamanlis appointed 150,000 new civil servants, pushing public sector employees past one million or 21 per cent of the active work force.

At the same time, public health expenditures jumped from five to seven per cent while public spending grew from 11.8 per cent to 13 per cent.

Eleftheriodis said the Karamanlis government was weak rather than reckless.

Karamanlis had little control over his party because many members owed their election to influential oligarchs, professional associations or trade unions.

They had no incentive to act on any parliament agenda.

Most Greeks receive their news from television stations, controlled 90 per cent by well-known businessmen.

Many owners were shipping magnates that relied heavily on state contracts and licenses and other licensees had businesses dependent on government patronage.

Although most media companies lost money, people kept them for political and economic influences.

Moreover, it lined the pockets of the very forces that caused economic collapse.

Greece’s current failure to reach agreement with the troika highlights a continuation of its inability to enforce fundamental reforms that include downsizing the civil service, opening up the economy, cleaning up politics and implementing austerity budgets.

Prime Minister Alexis Tsipras and his government have further politicized the issue by lambasting the international lenders “absurd proposal” in a recent Le Monde articles.

“The issue of Greece does not only concern Greece; rather, it is the very epicenter of conflict between two diametrically opposing strategies concerning the future of European unification,” he wrote.