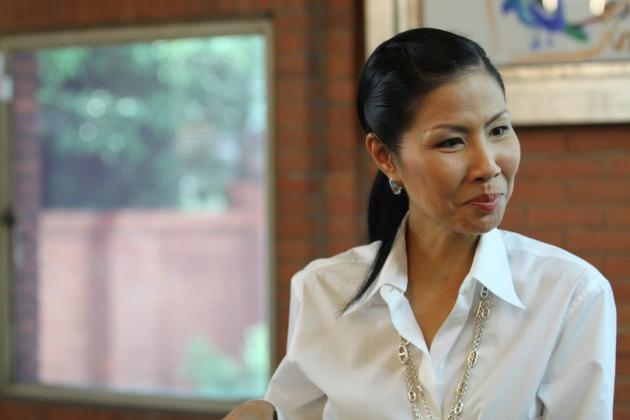 K I Woo, Human Capital Alliance Senior Advisor talks to Toshiba Chairman, Kobkarn Wattanavrangkul about Toshiba’s post flood operations. A prior version of this article was published in The Nation, July 12, 2012

Toshiba Thailand, with nine operating companies largely in Pathum Thani’s Bangkadee Industrial Estate and one at nearby Nava Nakorn Industrial Estate, drastically curtailed its operations during the prolonged floods.

“We were under water for 43 days beginning on October 21,” she said.

In her other role as Bangkadee Industrial Estate chairwoman, Kobkarn spent much of eight months ensuring that the privately owned estate, which houses 44 companies, installed government-mandated flood-protection barriers against future floods.

“We have built a dyke that is 5 meters above the mean sea level [MSL] to protect the estate from future floods.”

All industrial estates in the flooded areas, she said, have been required to build new dykes that meet four key criteria. The dykes must be high enough to protect against maximum rainfall witnessed during the past 70 years and must be 50 centimeters higher than the MSL.

“In addition, continuous monitoring systems must be implemented and adequate pumping capacity must be installed,” she said. At the same time, Toshiba Group’s 10 companies in Thailand have been gradually rebuilding their operations. “We are back to about 70-per-cent capacity and expect to hit 100 per cent by October,” she said.

The company’s combined investment in its factories is about Bt25 billion and it has a total workforce of about 10,000. “We produce air-conditioners, large refrigerators, electronics and computer parts, including disk drives, semiconductors and home-appliance accessories.”

The prolonged 2011 Bangkok floods, Kobkarn said, had also made most businesses acutely aware of the importance of business continuity plans (BCPs).

“Most companies have reinforced and strengthened their BCPs because it gave them a whole new perspective on risk,” she said.

For instance, two of the estate’s companies were not able to reopen after the floods because they could not assure their banks that they could retain their existing customers. In addition, some companies have had problems collecting flood and business-interruption insurance proceeds.

“We have received about 30 per cent of our insurance proceeds and are waiting for the insurers to verify and process the remaining payments,” she said.

Because many people could not get to work during the floods, numerous companies became aware of the importance of having multi-skilled workers who can fill in for several critical roles.

The floods also made many business operators aware of other risks that they may have previously passed over or ignored. These included risks associated with droughts, political uncertainty, the upcoming Asean Economic Community (AEC) and the Bt300 daily minimum wage being proposed at the time.

“Everyone realised that we must review all risks from all angles with 360-degree reviews,” she said.

Kobkarn credits Toshiba’s quick recovery to its four-decade-long proactive co-existence with all its stakeholders, including suppliers, dealers, customers and the neighboring community. “Everyone helped one another, not out of pity, but because of our long history of sharing benefits and losses.”

As a member of the founding Thai family who partnered with Toshiba, she also cited several great strengths that its Japanese partner has given them. “They have been most strong in emphasising business development, community cooperation and a need to ensure that our operations are environmentally sustainable,” she said.

Despite Toshiba’s and the Bangkadee Industrial Estate’s relatively rapid recovery to full operations, she said almost everyone had come to realise that no business operates sustainably in a completely risk-free environment.

“We must immunize ourselves so that we have stronger people, companies and communities that are able to withstand and survive any disasters that should arise.”

She also emphasized that for any business to operate sustainably, managing risk always comes down to a rigid risk-mitigation cost-benefit analysis.

Part 2: How the 2011 floods and earthquakes affected global supply chains.